A small bag of 100 tiny Hawaiian oysters, gathered in mid-August under State of Hawai‘i permit by staff of Maui Nui Marine Resource Council (MNMRC), represents the “next generation” in the nonprofit organization’s work to use oysters to filter and clean ocean water in Māʻalaea Bay. The project to improve ocean water quality in Māʻalaea is supported by the County of Maui Mayorʻs Office of Economic Development.

What’s amazing is that the tiny oysters appeared to have “volunteered” for the job.

Months ago, Maui Nui Marine Resource Council Programs and Operations Manager Amy Hodges was amazed to see that floating oyster larvae from native Hawaiian oysters (Dendostrea sandvicensis) had begun to voluntarily attach themselves to the outside of oyster cages that the organization had installed in Māʻalaea Harbor. Over a period of months, they grew into tiny oysters called “spat.”

“It was MNMRC’s goal to incorporate using Hawaiian oysters, which are native to Hawaiʻi, for this project starting in December 2020. And here they were, appearing on our cages,” noted Hodges. “These baby oysters were truly a gift from nature.”

MNMRC coordinated with the Pacific Aquaculture and Coastal Resources Center (PACRC) in Hilo, a project of the University of Hawai‘i at Hilo, to follow the right protocol to safely collect and ship these oysters to PACRC for spawning and propagation. The State of Hawaiʻi Department of Agriculture office on Maui inspected the oysters before they were shipped.

The tiny oysters will be well-fed and protected at PACRC, where they will spawn and their progeny will grow larger more quickly than those in the wild. They will be shipped back to Maui in December to be raised in cages as part of MNMRC’s oyster bioremediation project.

MNMRC expects to receive about 3,000 mature Hawaiian oysters from PACRC by the end of 2020.

Hodges explains that oysters are extremely effective natural filter feeders, with each oyster capable of filtering 40 to 60 gallons of water per day, removing sediment and other pollutants. “Our goal is to use the oysters to improve the ocean water quality to Māʻalaea Bay, to provide cleaner, healthier water for the coral reefs and local fish populations,” says Hodges. “The goal is to make Māʻalaea Bay a better place for fishing, paddling, surfing, swimming and beach days for the entire community. We’re glad to have the oysters ‘volunteering’ to help us reach that goal.”

All of the oysters are being used to clean polluted water and are unsafe to eat. The oysters may carry Vibrio bacteria which can cause watery diarrhea, often accompanied by abdominal cramping, nausea, vomiting, fever and chills. Vibrio is a naturally occurring bacteria and can be found in warm coastal waters and harbors, where it infects oysters.

The cages housing the oysters are clearly marked with warning tags stating, “Toxic. Do Not Eat. Research in Progress. Do Not Remove. Maui Nui Marine Resource Council.”

It is illegal to catch, take, kill, possess, remove, sell, or offer for sale oysters or clams from the waters of the state of Hawai‘i according to fishing regulations HAR 13-83 and HAR 13-85. Violators shall be punished as provided by law. Maui Nui Marine Resource Council is permitted through the State of Hawai‘i for its oyster project.

Support for this project was provided by Hawaii Tourism through the Aloha ʻĀina program and the County of Maui Mayorʻs Office of Economic Development. 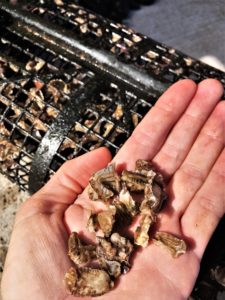 Hawaiian oysters collected under permit in Mā‘alaea Harbor by Maui Nui Marine Resource Council will be propagated at the Pacific Aquaculture and Coastal Resources Center in Hilo, and their progeny returned to Maui as part of an oyster bioremediation project to help improve ocean water quality in Mā‘alaea Bay. Photo credit: Maui Nui Marine Resource Council 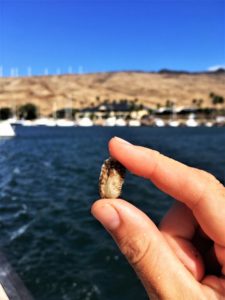 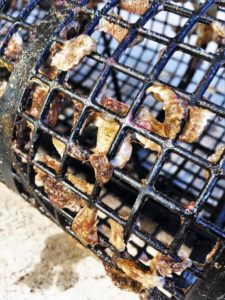 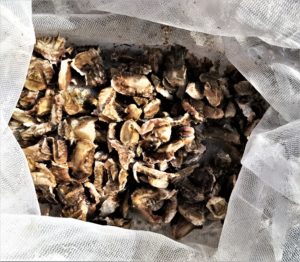 A bag of 100 tiny oysters was collected under State of Hawai‘i permit, then inspected by the Department of Agriculture on Maui, before shipment to the Pacific Aquaculture and Coastal Resources Center in Hilo, to be raised under ideal conditions for spawning and propagation. Photo credit: Maui Nui Marine Resource Council.