We are monitoring water quality during COVID-19
As of Monday, May 4, a small group of Hui O Ka Wai Ola staff members are monitoring coastal water quality at all 41 of our leeward Maui sample sites every three weeks. Sampling had been on hold since March 16 due to safety concerns during the COVID-19 pandemic. However, permission was granted from Maui County officials for our group to continue this essential work. Working in teams of two, the Hui’s Project Manager and Team Leaders are following strict guidelines to maintain a six-foot distance from each other, wearing face masks and sanitizing while collecting and processing samples. We are grateful to be monitoring at this unprecedented time when island activity is at an all-time low. We hope to learn if the decrease in visitors and changes in behavior may impact coastal water quality. We plan to maintain this monitoring protocol for the next two months and hope to get our amazing volunteers back in the field as soon as it is safe to do so. 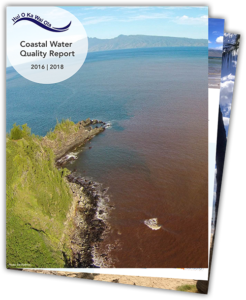 The Hui O Ka Wai Ola program is a living breathing example of how nonprofit organizations can effectively work with government agencies to stretch the agencyʻs resources and capabilities.

Together with the help of more than 35 volunteers from the community, Hui O Ka Wai Ola has greatly expanded the Department of Healthʻs ability to test ocean water quality at Maui beaches and to provide quality-assured data to County, State and Federal agencies.

We add to the data collected by the Department of Health with our testing that keeps a close eye on changing water quality conditions that can harm our coral reefs.

Our community-based program regularly gathers data about sediment, nutrients in the water, temperature, pH and more at 41 locations along Mauiʻs south and west shores. In 2019, we expanded our program to include testing for enterococcus bacteria at our South Maui testing sites.

We believe this data will allow for more effective management of our nearshore waters and ultimately, healthier coral reefs and cleaner ocean water for all to enjoy.

What We Test For

How it is measured: We gather samples at knee depth, then use a turbidity meter onsite to measure the amount of sediment (turbidity) in the water.

How changes are caused: Sediment carried from the land to the ocean (by streams, flooding, storm runoff) can cause ocean water to become brown or murky.

Why it is a concern: Sediment blocks sunlight from reaching reefs and can smother corals.

What we can do: When we find areas with high levels of turbidity, we can address upslope issues such as grading or clearing of land that caused sediment to flow into the ocean.

How it is measured: We measure pH, salinity and water temperature onsite using portable, handheld equipment.

How changes are caused: Changes in ocean chemistry can be caused by climate change and other local factors. Salinity can be changed by freshwater flowing into the ocean. Water temperature can fluctuate by season and can also be caused by climate change. Ocean acidity can be increased warming ocean temperatures. Warmer water also holds less dissolved oxygen (needed for aquatic plants and animals to survive).

Why it is a concern: Corals are very sensitive to changes in ocean chemistry, including increased ocean water acidity. Corals bleach when water temperature increases; collecting water temperature can help track localized variations between sites.

What we can do: We can monitor changes in reef health against changes in ocean water quality and continue to advocate for ways to reduce greenhouse gases and reverse climate change.

How they are measured: Water samples are gathered, refrigerated and shipped on ice to the SOEST Analytical Laboratory on Oahu for analysis of nitrogen and phosphorous.

How changes are caused: High levels of nitrogen and phosphorous can indicate pollution from wastewater, run-off from agriculture, landscaping and/or golf courses.

Why itʻs a concern: Too much nitrogen can cause an increase in invasive algae (limu), which is damaging to coral reefs.

What we can do: When we identify ocean areas with high levels of nutrients, we can pinpoint and address up-slope areas that are sources.

How it is measured: Water samples are gathered in sterile bags, which are then sealed and refrigerated. Samples are shipped on ice to regional labs, where they are analyzed for Enterococcus bacteria.

How it is caused: Bacteria may result from wastewater pollution. Enterococcus bacteria also live in soil and can be carried into the ocean via runoff.

Why itʻs a concern: Enterococcus bacteria are generally not harmful by themselves but do indicate the possible presence of pathogenic (disease-causing) bacteria, viruses, and protozoans that also live in human and animal digestive systems.

Hui O Ka Wai Ola works closely with the State of Hawaii Department of Health (DOH). The program is managed by these nonprofit partners: 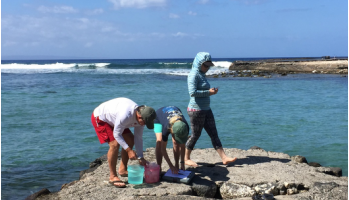 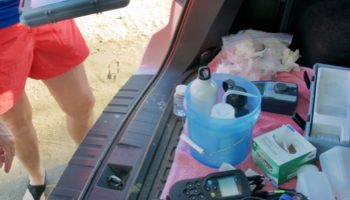 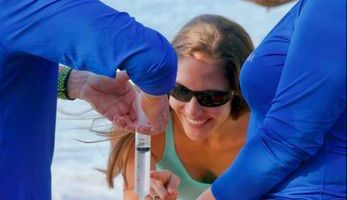