After a rainstorm on January 18, 2021, the State of Hawaii Department of Health Clean Water Branch issued a Brown Water Advisory for all of Maui.

Māʻalaea Bay was one of the areas that experienced a significant brown water event as a result of this rainstorm. 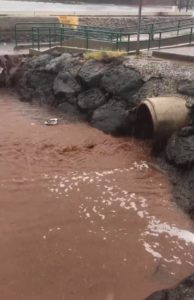 Curious about how so much sediment ended up in Māʻalaea Bay?

A monitoring project of head cuts (severe erosional features) launched in 2020 by Maui Nui Marine Resource Council on unused agricultural land in the Pohakea watershed measured the loss of an estimated 64,050 pounds (or 32 tons) of soil from just two head cut locations as a result of the January 18 rains. The two head cuts are located on the mauka (upslope) side of the Honoapi’ilani Highway across from Maui Ocean Center. The lost soil was likely carried via the stormwater through culverts and box culverts under the highway and into the bay.

What is a head cut? Head cuts occur when the flow of a stream is constricted (in this case by a culvert) and the water’s force is directed downward. This creates a sheer bluff or cliff in the stream known as the knickpoint. As the water erodes the soil, the knickpoint migrates further upstream each time the stream flows and a larger area is exposed to stormwater erosion. 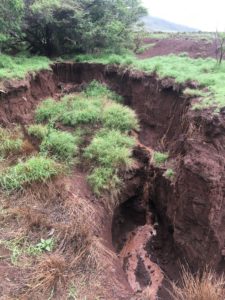 Sediment pollution is believed to be a significant cause of the coral reef decline in Māʻalaea Bay. This sediment, coming from legacy agricultural land, may also be transmitting excess nitrogen and other pollutants into the ocean.

While the two head cuts described here aren’t responsible for all of the sediment entering Māʻalaea Bay, repairing these two erosional sites can keep tons of sediment out of the ocean each year. That’s why Maui Nui Marine Resource Council is working to obtain funding to plan, design and implement repairs to to pull back and stabilize the now vertical or undermined walls of these two significant head cuts.

Free Feb. 10 talk on “Using the distant past as a guide for future decision-making about restoring and managing coastal lands in Waiheʻe and other parts of Hawaiʻi” by Scott Fisher, PhD