A beachside ceremony held this morning at Hanakaʻōʻō Beach Park in Kāʻanapali was organized by Maui Nui Marine Resource Council, West Maui Ridge to Reef Initiative and The Nature Conservancy, the three organizations that co-founded and co-manage this unique community program. It was attended by about 40 Maui residents, program volunteers and local VIPs including State Representative Tina Wildberger, Maui County Councilmember Tamara Paltin, and Maui County Managing Director Sandy Baz, who each delivered remarks and congratulations to the volunteers and staff.

A sampling session occurs over a week’s time and typically involves about a dozen volunteers, who wake up before sunrise and fan out in groups of three or four with cars packed with water quality monitoring equipment to gather and test ocean water samples along Maui’s leeward coast.

Todayʻs celebration included awarding of gift certificates donated by Duke’s Maui to the volunteers in the program, plus a ceremonial gathering of ocean water samples by long-time volunteers Kit Harris and George Burnette. It was followed by a demonstration of how the water samples are tested for sediment, temperature, pH and other factors conducted by Harris, Burnette, Representative Wildberger and Councilmember Paltin with narration by Hui O Ka Wai Ola Senior Team Lead Tiarra Stark.

Representative Wildberger had a special connection to today’s event: she had volunteered with the Hui O Ka Wai Ola monitoring program  to collect and test ocean water samples in South Maui before being elected as the District 11 Representative for Kihei, Wailea and Makena.

For Councilmember Paltin, the 100th sampling event also held special significance. She, along with then-West Maui resident Dana Reed, helped provide the spark that led to the creation of the community-based ocean water quality monitoring program after the pair observed an unusual increase in brown water events at DT Fleming Beach in 2013-2014.

“Large brown plumes started appearing at DT Fleming, even without much rainfall, which led to beach closures,” noted Reed, who is a retired electrical engineer and now lives in Pennsylvania. “One day I saw another brown plume and said, ‘That’s it! I have to investigate!’.”

Reed had learned how to test ocean water for turbidity at a UH Maui course taught by Donna Brown. She grabbed the sampling bottles she had received at the course and started gathering samples. It was then that she met Paltin, who was a lifeguard at the time. Paltin shared that she too was concerned about the brown water plumes and had photographed them and sent them to Watson Okubo, the Director of the Department of Health Clean Water Branch. Their sampling data wasn’t accepted because they did not have a Quality Assurance Project Plan (QAPP) in place to ensure the integrity of the data.

Undaunted, Reed and Paltin started documenting the water quality at DT Fleming on a regular basis, gathering data from water samples and photos, including aerial photos that Reed’s husband Bill Rathfon obtained with his drone.

Reed said that Paltin would sound the alert – “the stream is running brown!” – and Reed would rush over to grab water quality samples. Paltin also kept sampling bottles at her lifeguard station so she could gather samples during her breaks.

Paltin was a member of the Marine Nui Marine Resource Council Clean Water Committee and together with Reed and Rathfon presented data and pictures from DT Fleming to the group.

Someone who had hiked upslope to understand where the sediment runoff was originating reported that a site that was being prepared for the development of Mahana Estates appeared to be the cause of the runoff.

The project manager from Mahana Estates was invited to meet with Marine Resource Council’s clean water committee and visit the site. She reported that the developer had put up sediment fences and barriers to control the runoff but was having trouble keeping them in place because they kept breaking.

The Department of Public Works said that the developer was following the County’s Best Management Practices (BMPs) and asked for baseline data to compare the current water quality issues at DT Fleming to past years when the problem wasn’t occurring.

That data didn’t exist. But Paltin, Reed, Rathfon and Maui Nui Marine Resource Council persisted in spotlighting the problem  – and ultimately a County engineer, Department of Health representative and the developer visited the site and saw the source of the sediment.

The result was a County-mandated shutdown of the project for more than a year and improvement of the County’s BMPs.

“From that experience, I saw the importance of water quality data – including the need for baseline data – at all of our Maui beaches,” said Reed, who attended the ceremony remotely from her home in Pennsylvania. “At that time, the Department of Health Clean Water Branch had only one person sampling water quality for all of Maui. They suggested that we create a citizen’s monitoring group.”

Maui Nui Marine Resource Council and The Nature Conservancy joined together to host Carl Berg, a research scientist who has worked on water quality issues on Kauai, to learn how to create a community-based water quality monitoring program here.

He told the groups that they needed to create a Quality Assured Project Plan (QAPP) that would meet EPA requirements and State Department of Health standards for projects that involve the collection and analysis of water samples.

This led to a meeting with the Department of Health, Environmental Protection Agency, NOAA, Maui Nui Marine Resource Council, The Nature Conservancy, West Maui Ridge to Reef Initiative and other community environmental groups to discuss creating a water quality monitoring program for Maui.

The result was the launch of Hui O Ka Wai Ola (the “association of living waters”) to be managed through a partnership of Maui Nui Marine Resource Council, The Nature Conservancy and West Maui Ridge to Reef Initiative.

Maui Nui Marine Resource Council agreed to serve as the fiscal sponsor of the program and oversee its finances and payroll.  A grant from National Fish & Wildlife Foundation obtained by The Nature Conservancy helped fund paid positions for Reed and Kim Falinski to create the program in West Maui and purchase water sampling equipment. A second grant from National Fish & Wildlife Foundation later obtained by Maui Nui Marine Resource Council made it possible to expand the program to South Maui.

The QAPP was created over a two-year period by Reed, Falinski and Scott Lerner of The Nature Conservancy. The Department of Health Clean Water Branch signed off on the QAPP and the first official samples of the new Hui O Ka Wai Ola program were collected in June of 2016.

Volunteers signed on to receive the needed training and commit to the early morning sampling sessions. “People didn’t join for fun. They joined because they cared,” said Reed. “I am amazed at how many good quality people we got, who stuck with it. People are so dedicated. I am so impressed.”

At each sampling site, one of the volunteers wades into knee deep water and fills several containers with sea water. The citizen-scientists use portable lab equipment to analyze the samples for pH, dissolved oxygen concentration, salinity and turbidity. The water quality samples are transferred to indoor labs for additional testing. Further testing for nutrients is performed on samples that are frozen and shipped to the labs at the University of Hawaii at Manoa.

Today, the Hui O Ka Wai Ola program manages data collected at 40 leeward sites, which has been provided to the Department of Health Clean Water Branch, to be included in reports to the EPA and State and County agencies. New data is currently being gathered at 29 shoreline locations in West and South Maui.

Dozens of volunteers have worked with the program since its inception, including Hawaii State Representative Tina Wildberger and Maui resident Kit Harris. The program has four part time staff: Senior Team Lead Tiara Stark and Team Leads Meredith Beeson, Mitch Brown and Nalei Sampson. Retired biophysicist Cathy Maxwell is the organization’s Technical Advisor and Bill Rathfon is the Data Manager. Hui O Ka Wai Ola is led by a steering committee of representatives of the three partner organizations, along with Dana Reed and Kim Falinski, who are the Quality Assurance advisors. 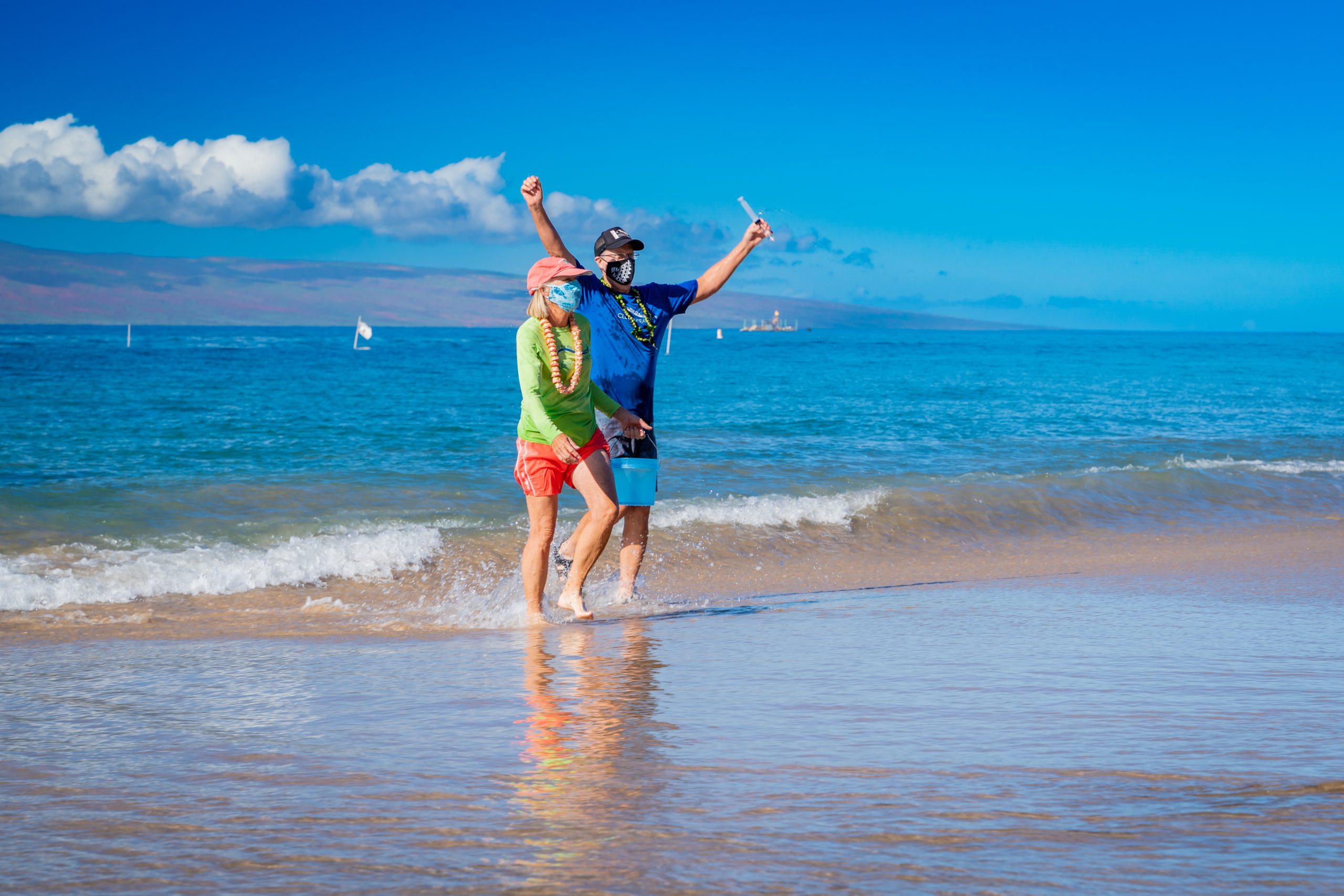 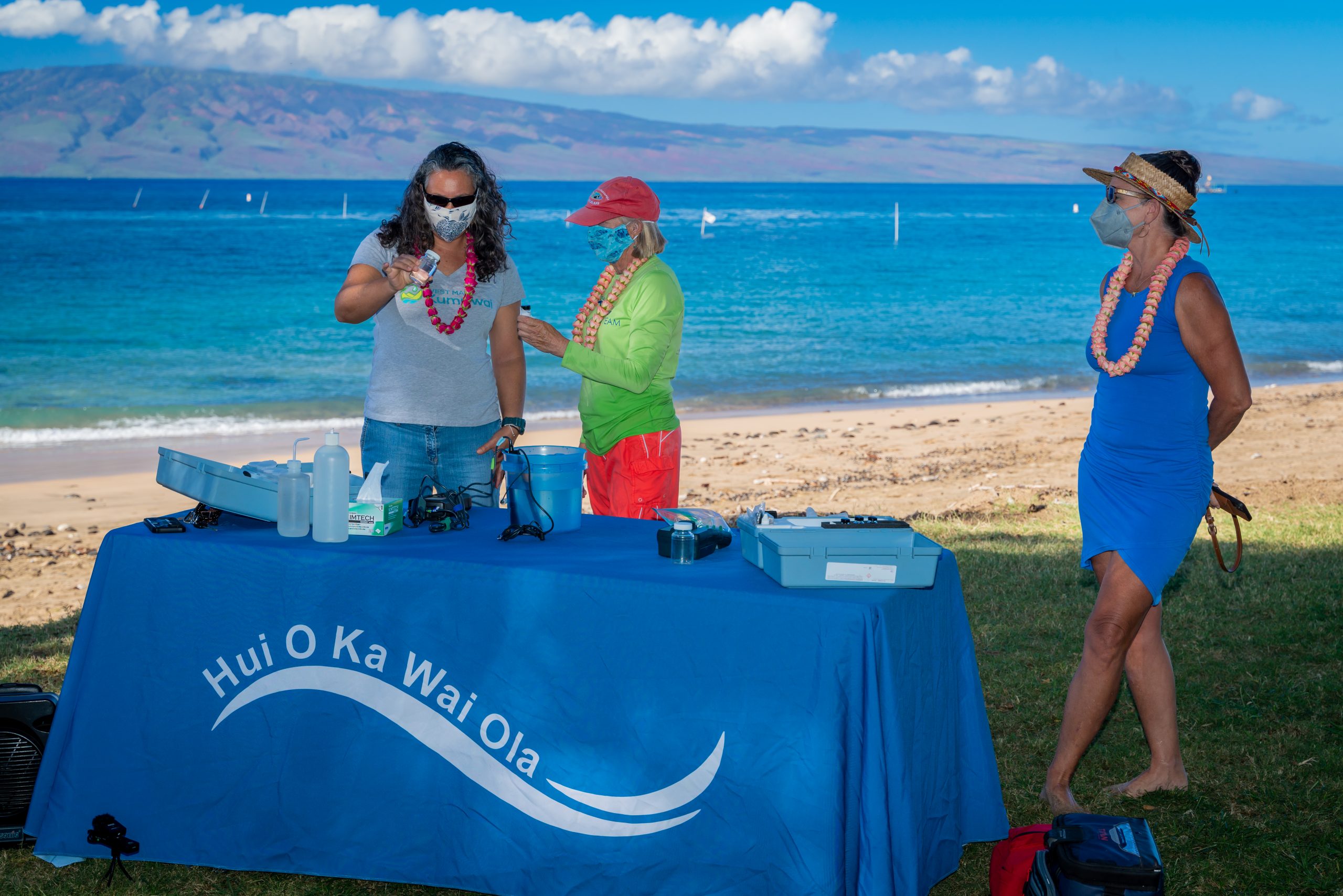 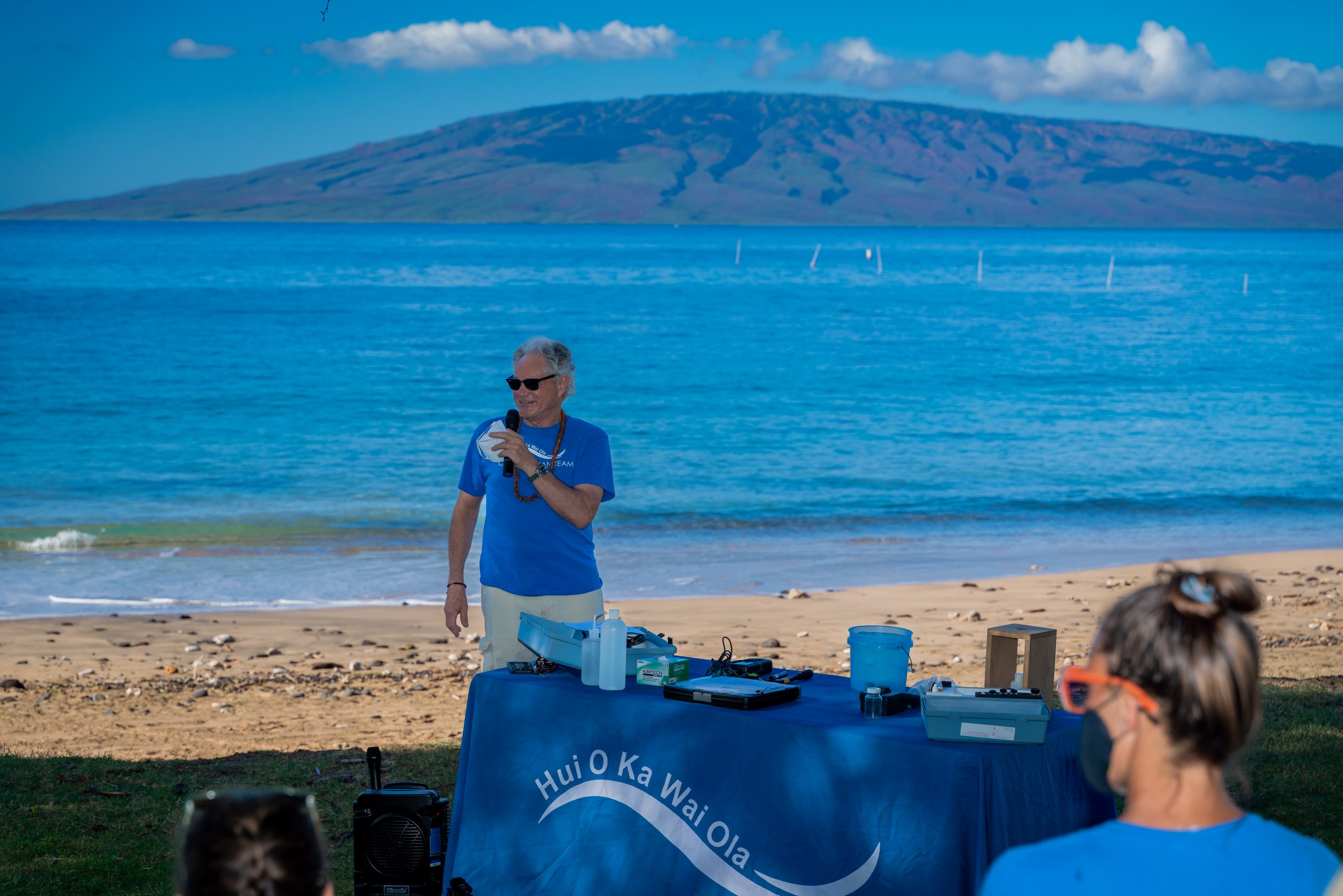 Maui Nui Marine Resource Council Executive Director Mike Fogarty thanks the volunteers and announces a special gift for each one donated from Duke’s Maui. 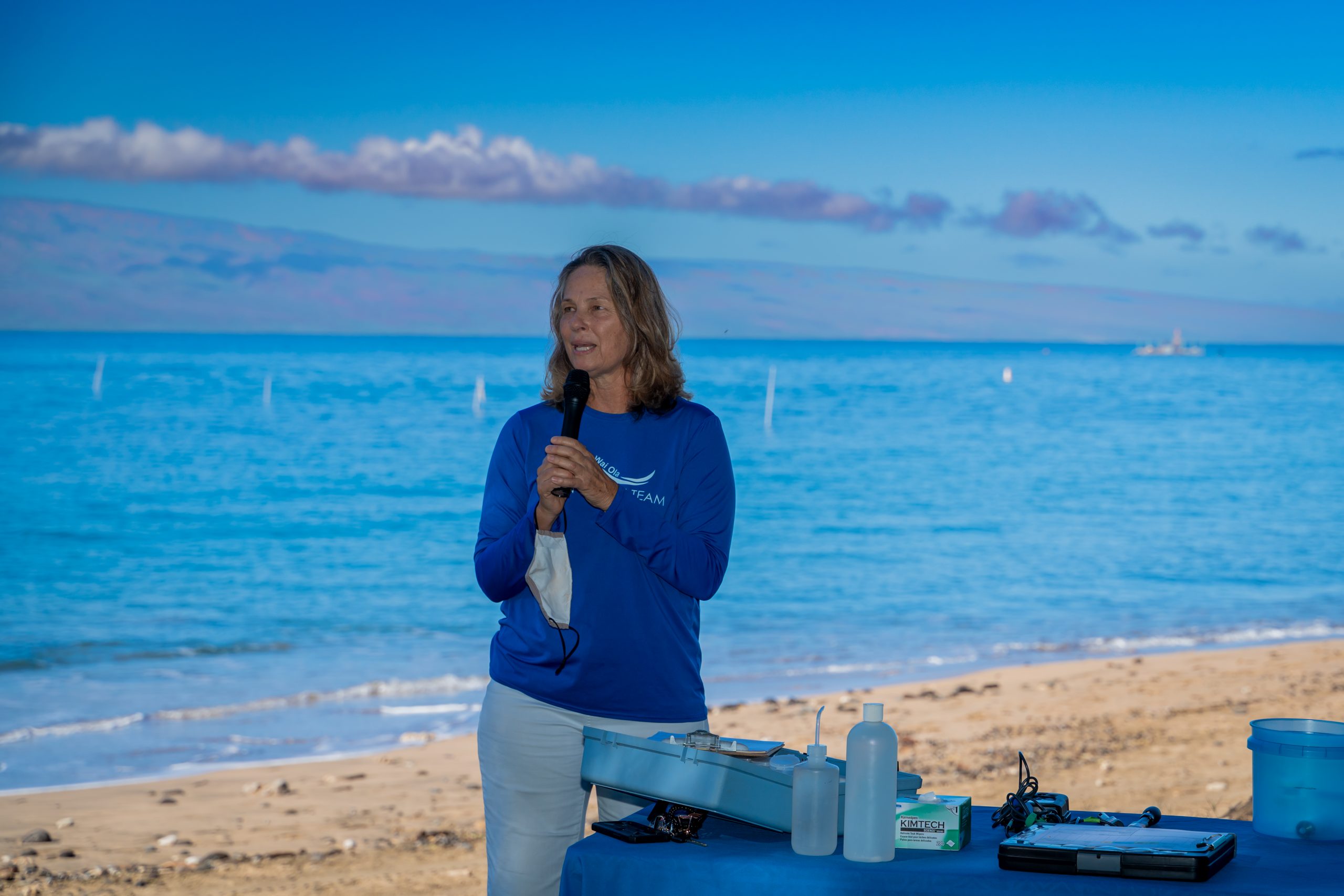