It’s often been said that “reef management” is a misleading term. After all, it’s not the reefs that need guidance; it’s human behavior that needs to be managed. One good example of the impact of humans working together as a community to protect reefs is the Herbivore Management Program at Maui’s Kahekili Beach Park. Three decades of detailed coral monitoring that has occurred there had led to informed and effective management actions.

A poster presentation by Darla White and Russell Sparks (Hawaii Department of Land and Natural Resources, Division of Aquatic Resources) and Ivor Williams (NOAA National Marine Fisheries Service, Coral Reef Ecosystem Division) showed the results of management of the herbivore fisheries at Kahekili and its impacts on the resilience of the reef.

You can view the poster at:
https://www.eposters.net/pdfs/the-kahekili-herbivore-fisheries-management-area-enhancing-resilience-of-a-reef-showing-signs-of.pdf 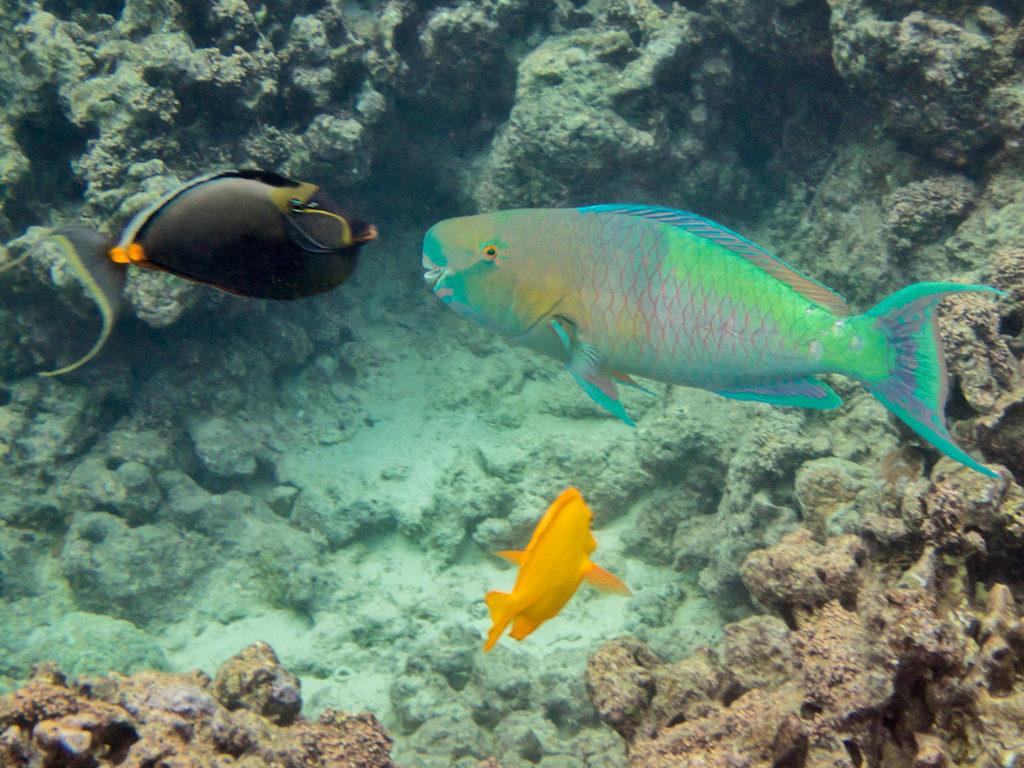 According to the poster, Dr. Eric Brown initiated monitoring at Kahekili Beach Park in the early 90s, In 1999, through the UH Coral Reef Assessment and Monitoring Program (CRAMP), the area was converted into one of a statewide network of intensively monitored reef sites. Hawaiiʻs Department of Aquatic Resources (DAR), part of the state Department of Land and Natural Resources (DLNR), has since worked to complete annual re-assessments of this site in collaboration with UH CRAMP.  It is through this intensive effort to measure change on the reefs in this area, that DAR developed clear concerns over rapid declines in coral cover, increases in algae growth, and reduced level of critically important herbivorous fishes. 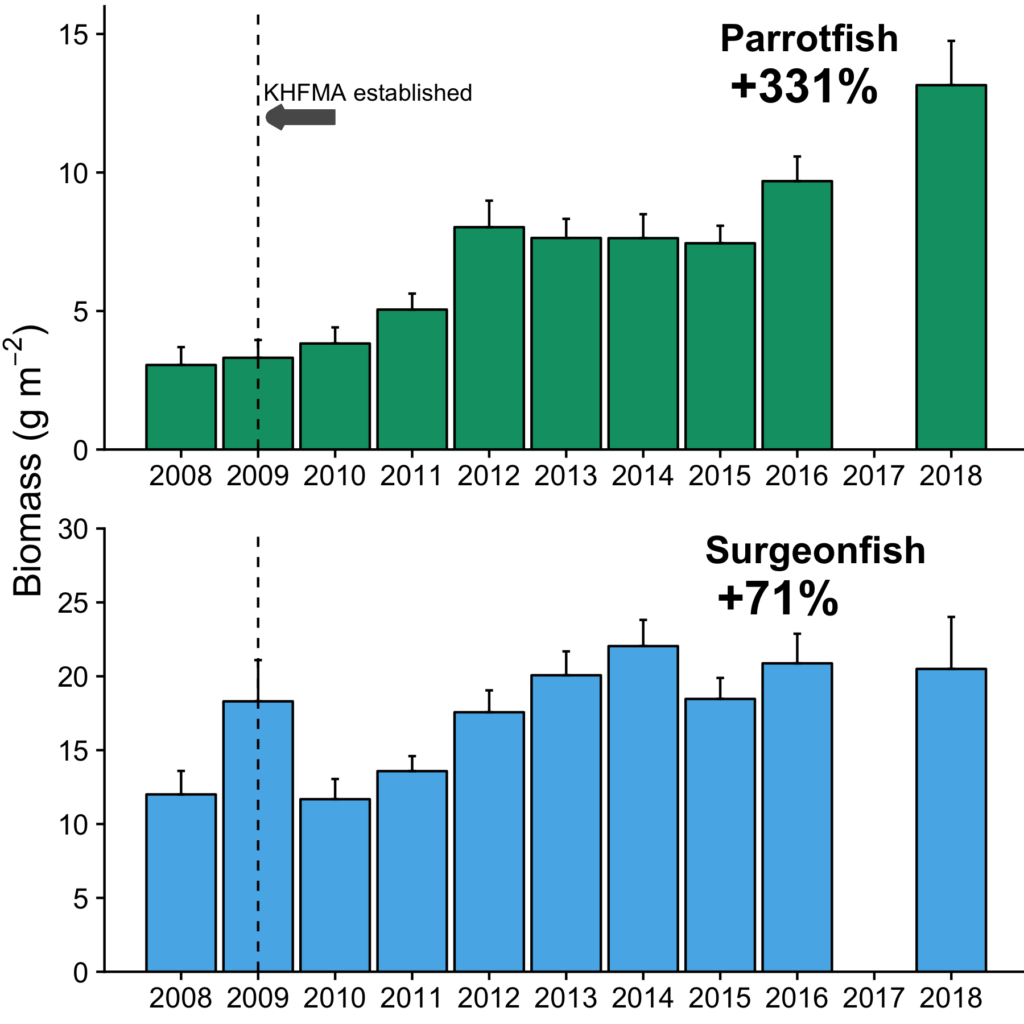 Herbivorous fish are fish that consume algae and seaweed. These fish include surgeonfish, parrotfish and chubs. The fish were being harvested for human food, leaving the reef defenseless against the onslaught of algae. The increase in algae resulted in the declining coral cover.

As a result, the DAR initiated discussions about the herbivore management area and got very good support from local long-time fishing families from the area, and from recreational fishing advocates such as Darrel Tanaka, Brain Yoshikawa and others. As a result, fishing for herbivores (such as parrotfish) was banned at Kahekiki, along with the taking of sea urchins. The program also prohibited the feeding of fish, because such activity decreases fishes’ natural appetite for seaweed.

Furthermore, marine biologist advocates such as Liz Foote and many others have helped move the effort forward and helped involve citizens and educate the public to improve compliance.

These new controls and outreach efforts have worked. Since the management area went into effect in 2009, there has been a 331% increase in parrotfish biomass at this reef, meaning that parrotfish have been growing to a larger size (which means they are better algae grazers) and are found in greater numbers. Surgeonfish increased 71% from 2008/09 to 2018 in this area. (See poster at https://www.eposters.net/pdfs/the-kahekili-herbivore-fisheries-management-area-enhancing-resilience-of-a-reef-showing-signs-of.pdf.)

Best of all, the seaweed and microalgae were reduced greatly, down to almost nothing. Success!

Current evaluation of the effectiveness of the area has been conducted with a partnership between DLNR/DAR and the NOAA science center (Dr. Ivor Williams).  This collaborative effort has allowed DAR  to conduct extensive yearly monitoring assessments and measure the response of the area to the management efforts.

Which takes us back to the question of managing reefs vs. managing humans. Human behavior can be managed, through education and effective management rules.  The results at Kahekili offer hope for what can be accomplished at other reefs throughout Maui Nui. 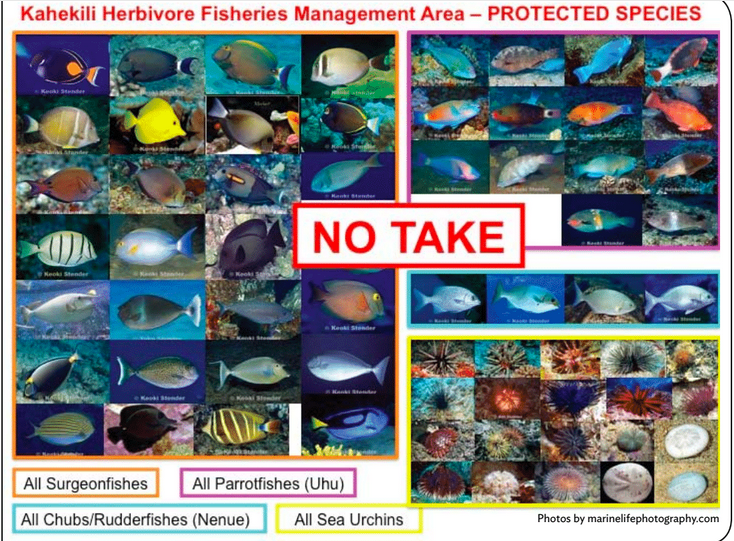