Maui Nui Marine Resource Council invites the public to a free talk on Monday, December 9 at 5:30 pm at The Sphere at Maui Ocean Center to learn about the “The Coral Pledge,” a new initiative to reduce human impacts on Hawaiiʻs reefs year-round.

The presenter will be Dan Dennison, Senior Communications Manager for the Hawaii Dept. of Land and Natural Resources (DLNR). The Coral Pledge was created by the DLNR Division of Aquatic Resources and was introduced statewide earlier this month.

The eveningʻs presentation will include details about The Coral Pledge and will feature a showing of “Saving Coral,” a  half-hour television special created by DLNR to educate the public about threats to Hawaii’s coral reefs. Dennison will also provide updates on “30 x 30” which is a State of Hawaii commitment to effectively manage 30% of Hawaiiʻs nearshore ocean waters by 2030.

At the conclusion of the evening, Maui Ocean Center will also provide a special holiday treat for attendees: a viewing of the movie, “Humpbacks of Hawaii,” to be shown in 3D at The Sphere.

“The Coral Pledge provides a simple set of recommendations to help reduce human impacts to Hawai‘i reefs year-round, but particularly during bleaching events,” says Dennison. “While all ocean users can learn from the recommendations in The Coral Pledge, we especially encourage commercial tour operators and businesses who work in and around the ocean, and who regularly interact with visitors, to attend to learn about The Coral Pledge and hopefully to sign up to participate in this initiative.”

Admission to this event is free and the public is invited. Because seating is limited in The Sphere, the public is encouraged to make a free reservation by visiting http://bit.ly/coralpledge.

Maui Ocean Center is donating the use of The Sphere to Maui Nui Marine Resource Council for this presentation. This new facility features comfortable movie-style seating, excellent acoustics and state-of-the-art video equipment with a large presentation screen.

Dan Dennison currently serves as the Senior Communications Manager for the Hawaii Dept. of Land and Natural Resources. Dan brings more than four decades of broadcast journalism experience to his current position.

Prior to joining DLNR in 2014, Dan served as news director at six, top-rated television stations, in four states, including KHON2 and KHNL/K5 in Honolulu. He began his news management career in his native Colorado after being a television reporter and photographer for 25 years covering Western Colorado for Denver television stations. He has multiple Emmy awards, state broadcaster association awards, and Edward R. Murrow awards both as a reporter and news director.

At DLNR, Dan has been responsible for the production of more than 1.000 videos to date, including seven television specials. He supervises a team of communications specialists who handle all internal/external communications, media relations, and social media.

Dan has served on numerous state and national boards both as a broadcaster and now as a government communications professional. He is an avid hiker, bicyclist, snorkeler, skier, and loves to play tennis and Frisbee. He says he is both blessed and honored to document the work of DLNR staff and its many partners in the mountains, forests, and waters that comprise Hawaii Nei. “The best job in the world,” he says. 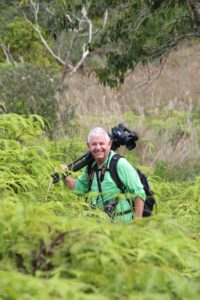 Dennison has been involved from the beginning in producing media materials to raise public awareness about Rapid Ohia Death. 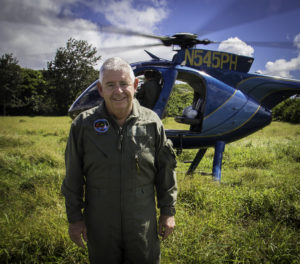 Dan Dennison with Governor and First Lady Ige, hiking the Kalalau Trail in conjunction with the reopening of the Napali Coast State Wilderness Park and Ha’ena State Park on Kaua’i. 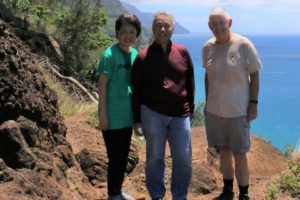 Public Invited to Free Talk by Duane Sparkman on “Preventing Ocean Pollution: Proven Alternatives to Herbicides and Pesticides for Your Home, Business and Landscaping”