The biological soil amendment, called SoilThrive™, is a microbe- and nutrient-rich liquid produced at ESM in Upcountry Maui by brewing microbe-rich compost in water. The amendment is applied to soils and plant surfaces to rebuild healthy soil biology, which results in improved soil health, an increase in plant-available nutrients and soil structure, reduced compaction, and reduced disease. 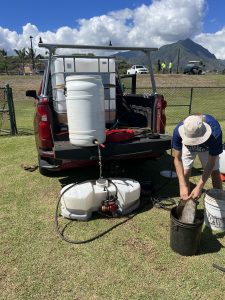 Maui Nui Marine Resource Council reached out to the County of Maui Department of Parks and Recreation, the Wailea Community Association and the Makena Golf and Beach Club to establish three test sites where the soil amendment would be applied to turf landscapes at no charge to the property owner. The three sites where the compost tea has been applied include a small ball-field at the county-owned Keopuolani Park in Kahului; a section of a turf field used for event parking in Wailea owned by Wailea Community Association; and three tee boxes on the South Course of the Mākena Golf and Beach Club.

The ESM SoilThrive™ team assessed each site’s soil health by drawing soil samples and analyzing microbial activity, and utilized the results to custom-brew the biological amendment to address the site’s soil deficiencies.

“At each site, they found that the initial soil samples showed high levels of bacteria, and little else,” said Jill Wirt, Project Manager at Maui Nui Marine Resource Council. “Healthy soil has a rich mixture of beneficial bacteria, fungi, and protozoa; most of which were lacking at each site.” 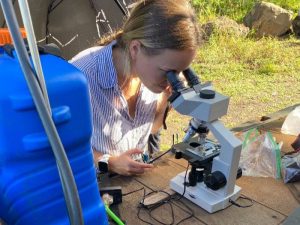 MNMRC’s Jill Wirt examines beneficial microbes in a soil sample at a site treated with SoilThrive™.

“The biological soil amendment consists of compost suspended in water with added ‘microbe food’ that is brewed through aeration over an extended period of time in order to drastically increase beneficial microbes,” explains ESM soil scientist Jonathan Klassen. The liquid is then applied via spraying within 24 hours of brewing. The solution sticks to plant and soil surfaces while permeating deep into the soil where the microbes are most effective.

“As soil health is restored, the soil can retain more water, reducing irrigation needs,” says Wirt.  “Healthy landscapes start with healthy soils, which is why we are utilizing this locally made soil amendment.”

Since the start of the pilot, the scientists at ESM have applied five rounds of the amendment to each site, allowing beneficial microbes to establish themselves and multiply. Intermediate soil samples have shown increased microbial activity and a higher fungi to bacteria ratio than nearby control areas, indicating the liquid amendment is successful in establishing soil microbiology.

While the results will be evaluated over a one- year period, the initial results are promising. Parks Beautification Manager Michael-James Mendiola comments, “Usually at this time of year [during the summer], we see patchy brown spots where irrigation doesn’t reach, but we haven’t had any issues with that so far, specifically on the field that’s being treated.” 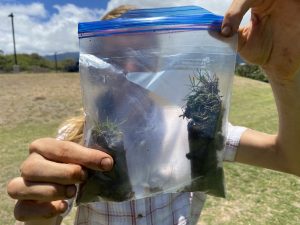 A comparison of topsoil depth between control site (left) and SoilThrive™ site (right).

“Our reefs are facing a lot of stressors from global threats such as rising ocean temperatures due to climate change and pollution from land-based runoff, so it’s important we try to reduce our local impacts as much as possible,” urges Wirt. “The results of this pilot project with the liquid amendment are promising so far, especially with the potential of reduced irrigation needs – a very important benefit as Maui’s drought conditions worsen.” 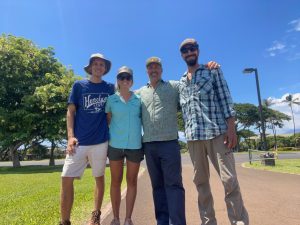 The pilot project will be completed in early 2023 with final soil sample results from a year of using the biological soil amendment in the place of synthetic fertilizers and chemical pesticides and herbicides.

Maui Nui Marine Resource Council is a 501(c)(3) nonprofit on Maui working toward clean ocean water, healthy coral reefs, and abundant native fish for Maui Nui. Their Reef Friendly Landscaping program also offers certifications for properties who are utilizing reef friendly landscaping practices. If you would like to be involved in this program and certified as a Reef Friendly Landscaping property, please email [email protected].

Molokini During COVID-19: Free Webinar Looks at Research Conducted at the Island During Height of the Pandemic