MĀʻALAEA, MAUI, HI – A pilot project to use oysters to improve ocean water quality in Māʻalaea Harbor was launched today by Maui Nui Marine Resource Council, with a blessing by Kimokeo Kapahulehua and a short ceremony attended by local VIPs, the media and the organization’s staff and board members.

“Oysters are nature’s most efficient water filters; they eat by pumping large volumes of water through their bodies and in the process, they capture sediment and pollutants from the water column,” says Amy Hodges, Programs Manager at Maui Nui Marine Resource Council. “Estimates are that a single oyster can filter up to 50 gallons of ocean water in a day depending on conditions.”

“Our goal is to use the oyster’s natural filter feeding abilities to make Māʻalaea Bay cleaner and healthier for fishing, swimming, paddling and surfing,” notes Hodges. 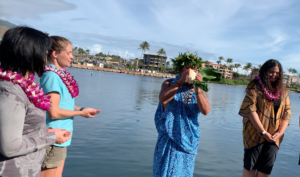 The oyster pilot project in Māʻalaea is supported by the County of Maui Mayor’s Office of Economic Development. Additional support is provided by Hawaii Tourism Authority’s Aloha Aina Program.

Maui Nui Marine Resource Council is conducting this project in partnership with O‘ahu Waterkeeper, a neighbor island nonprofit who installed oysters at Pearl Harbor, Kāne‘ohe Bay Marine Corps Base, and Ala Wai Harbor in 2019 for the purpose of improving ocean water quality and clarity.

Hodges explains that the oysters installed in Māʻalaea are Pacific oysters (Crassostrea gigas) which are found throughout the main Hawaiian Islands. “The broodstock for the oysters that we are installing in Māʻalaea came from Hawai‘i, and were then raised in ideal conditions at the Pacific Aquaculture and Coastal Resources Center (PACRC) at the University of Hawai‘i at Hilo,” she says.

After months at PACRC, the young oysters are now believed to be large and hardy enough to survive the heavily sedimented waters of Māʻalaea Harbor. The oysters will live in cages below the water surface and away from boat traffic. They were raised triploids, meaning they are sterile and likely unable to reproduce.

“Oysters are used around the world to help improve water clarity and quality.  Cleaner water allows for sunlight penetration, which is important for corals and other animals,” says Rhiannon Chandler-‘Īao, Executive Director of Waterkeepers Hawaiian Islands.

“Hawai‘i’s nearshore ocean waters are not supposed to have too much phytoplankton, but fertilizers and wastewater nutrients such as nitrogen, phosphorous and potassium cause algae blooms,” says Hodges. “Oysters feed on microalgae, which ultimately makes the water clearer and better for corals.”

“It’s important that the public understand these oysters are not suited for eating,” says Hodges. “There’s too much pollution here to make it safe to consume them. You don’t want to get sick with diarrhea and vomiting due to eating oysters from polluted water.  Instead, please get your oysters from places with clean water and leave these oysters to do their work of making Māʻalaea Bay better for fishing, surfing and ocean recreation for everyone.”

Every two weeks, MNMRC staff and volunteers will be pulling up the cages to monitor the condition of the oysters and clean cages. If the oysters thrive, the pilot project will be expanded to include more oysters later in 2020.

Oysters have also been put to work in the Chesapeake Bay, where the U.S. Army Corps of Engineers has been rebuilding traditional oyster reefs using shells from mollusks consumed in restaurants. In New York Harbor, an ambitious project called the Billion Oyster Project hopes to install enough oysters to totally filter the entire harbor every three days.

The oyster project in Māʻalaea is part of a two part program by Maui Nui Marine Resource Council to improve ocean water quality in the bay. Upslope, the group is working in the 4,000 acre Pohakea Watershed, implementing projects outlined in the Pohakea Stormwater Management Plan to reduce sediment-laden runoff flowing into Māʻalaea Bay.

“MNMRC commissioned the extensive Pohakea Plan by Maui Environmental Consulting,” says Hodges. “We have been writing grants and raising funds to enact this plan over a multi-year period.” To review the plan, please visit http://bit.ly/Pohakea

To gather baseline data about current ocean water quality in Māʻalaea Bay, Maui Nui Marine Resource Council is conducting regular kayak-based ocean water monitoring throughout the bay, using an electronic monitoring probe that provides a stream of data in real-time as the kayak travels through the water. The probe was purchased as the result of a grant from Lush Cosmetics Charity Pot.

This project is made possible with support from National Fish and Wildlife Foundation, County of Maui Mayorʻs Office of Economic Development and Hawaii Tourism through the Aloha ʻĀina program. 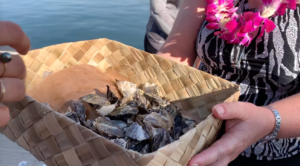