During the 4th of July holiday week when the United States celebrates freedom and liberty, Maui Nui Marine Resource Council will be hosting a free talk about freeing large whales from ropes, nets and other life-threatening entanglements.

This free presentation, titled, “Catch and Release: Large Whale Entanglement Response,” will be offered by Edward Lyman on Tuesday, July 2 at 5:30 pm at The Sphere at Maui Ocean Center. The event is open to the public. The presentation will include amazing video footage from pole- and helmet-mounted cameras showing some of the whale rescues in Hawaii by the network of responders that are authorized to assist with such entanglements,

Seating is limited, so reservations (free of charge) are recommended and can be arranged at http://bit.ly/WhaleRescueTalk.

Lyman, the Hawaiian Islands Humpback Whale National Marine Sanctuary’s Natural Resources Management Specialist, has responded more than 120 times to calls to free large whales and other marine animals from entangling gear over the past 25 years, resulting in more than 50 large whales being freed.

“For over 17 years the Hawaiian Islands Humpback Whale National Marine Sanctuary, working with NOAA Fisheries’ Marine Mammal Health and Stranding Response Program and the on-water community, has led a successful community-based network of experienced responders to free large whales, like the humpback whales found seasonally around Hawaiʻi, from life-threatening entanglements,” said Lyman. “As a result, the sanctuary and its partners have removed gear from more than 30 large whales and gained a wealth of information to mitigate the threat and its broad impacts.”

During his presentation, Lyman will describe the difficult and sometimes dangerous task of disentangling 40-ton, likely free-swimming whales, using techniques modified from those employed to catch large fish or used historically by whalers to kill the animals.

The talk will be part of the July monthly meeting of Maui Nui Marine Resource Council, a nonprofit organization working for healthy coral reefs and clean ocean water. It will take place at The Sphere at Maui Ocean Center, located at 192 Maʻalaea Road at the Maʻalaea Harbor Shops.

Doors will open at 5 pm and the talk will begin promptly at 5:30 pm.

“We are grateful to Maui Ocean Center for generously donating the use of The Sphere for this presentation,” said Amy Hodges, Programs Manager at Maui Nui Marine Resource Council. “We are also very thankful to Ed Lyman for making time to give this talk during a holiday week celebrating ʻlife, liberty and the pursuit of happinessʻ — important for whales as well as people.”

About Edward Lyman:
Ed Lyman is currently the Hawaiian Islands Humpback Whale National Marine Sanctuary’s Natural Resources Management Specialist and Large Whale Entanglement Response Coordinator under NOAA’s Office of National Marine Sanctuaries. He works closely with NOAA Fisheries, and under their Marine Mammal Health and Stranding Response Program. For more than 25 years Ed has worked with NOAA, state agencies, and others to better understand the animals and to address the threats that impact them, especially ship-strikes and entanglements. His efforts encompass Alaska, the East and West Coasts, Hawaiʻi and other countries. Ed has worked with the Hawaiian Islands Humpback Whale National Marine Sanctuary for more than 17 years.

Ed has participated in over 120 disentanglement efforts and helped free more than 50 large whales – 30 off Hawaiʻi. He assists NOAA in coordinating a community-based network to provide safe and authorized response to entangled large whales. However, the ultimate goal is working with fishermen, scientists, managers, and others to gain valuable information that may reduce entanglement threat in the future.

Ed graduated from the University of New Hampshire, where he received a Master’s of Science studying semi-aquatic mammals and island biogeography. He worked for the Shoals Marine Laboratory and Sea Education Association, where he gained a strong marine background. He has studied whales since 1994, when he worked for the Provincetown Center for Coastal Studies, a non-profit whale research and rescue organization. Ed also worked for the Massachusetts Division of Marine Fisheries, where he worked with fishermen to reduce entanglement impacts. 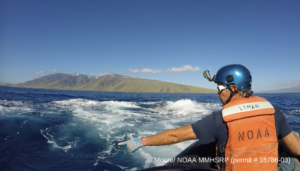 A video camera mounted on Ed Lyman’s helmet records the many steps involved in rescuing entangled large whales. Videos of whale rescues and disentanglements will be shown at Ed Lyman’s talk on July 2 at The Sphere at Maui Ocean Center.          Moore/ NOAA MMHSRP (permit # 18786-03)

Ed Lyman works with a trained and NOAA-authorized response team to free an entangled humpback whale off Maui. 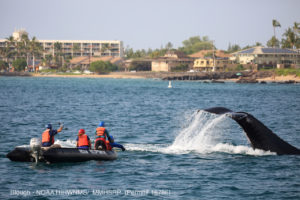 Ed Lyman uses a hooked knife on the end of a pole to disentangle a whale. Once approachable, rescuers safely assess the animal and entanglement, and attempt to free the animal of all entangling gear. 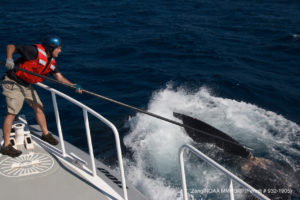 Ed Lyman lifts coaxial cable the team has just cut free of a humpback whale off Maui. Over 800 feet of the cable was removed and recovered. Entangling gear is not always fishing gear. 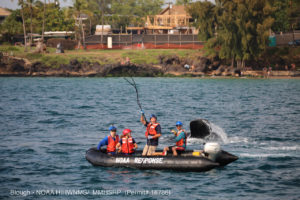