Free Presentation on “The Other Side of Coral Restoration: Slow Growing Massive Coral Forms and Land-Based Coral Nurseries in Hawaii”  to be Offered by David Gulko

Free Presentation on “The Other Side of Coral Restoration: Slow Growing Massive Coral Forms and Land-Based Coral Nurseries in Hawaii”  to be Offered by David Gulko

A land-based coral nursery that quickly grows massive coral colonies for replenishing degraded reefs is the topic of a free presentation at Maui Nui Marine Resource Council’s March 6 meeting. David Gulko, Aquatic Biologist IV and Coral Ecologist for the State of Hawaii Division of Aquatic Resources and Director of the DLNR Division of Aquatic Resources (DAR) Coral Restoration Nursery will present on this innovative program.

The presentation is open to the public and takes place at Pacific Whale Foundation’s classrooms at the Maʻalaea Harbor Shops. Doors open at 5 pm with the hour long presentation beginning at 5:30 pm. Time will be provided to ask and answer questions and free refreshments will be served.

“While massive coral species are more resistant to bleaching, they are very slow growing in the wild,” notes Gulko.

The State of Hawaii has recently implemented an innovative program which allows for these massive coral species to be fast grown in the Stateʻs land-based Coral Restoration Nursery.

The program involves the collection of small (10 cm) live massive forms of coral colonies mostly from within public harbors. At the State’s land-based Coral Restoration Nursery, they are micro-fragged and then fast-grown into large-sized (42 cm and 84+ cm) massive colonies in a fraction of the time it would take to occur naturally.

“In the wild in Hawaii, these corals would typically grow only 1 -2 cm/year. To grow corals 42 cm would take 20+ years in the wild,” says Gulko. “In our nursery, we are growing massive colonies in a fraction of the time it would take to occur naturally.”

According to Gulko, the resulting large colony modules are then placed onto degraded natural Hawaiian coral reefs in an effort to restore these reefs back towards their earlier ecologically-complex state. 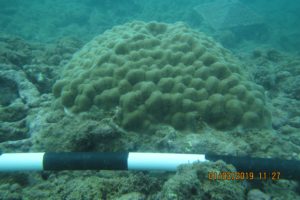 The outplanted colonies are evaluated using the State’s Coral Ecological Services and Functions Tool. “We can calculate an offset that can be used by developers and responsible parties to pay for coral and habitat loss incurred elsewhere in Hawaii,” Gulko notes. “The result is a dynamic program to put out large, live coral colonies, paid for without large expenditures of public monies, and without the extremely long natural recovery rates. This program can replace large corals that are normally found in Hawaii in one year instead of decades.”

According to Gulko, the program is now expanding to focus on extremely rare coral species to re-introduce them back into the wild using similar techniques.