“The first few years were rough,” said Mathieu St Louis, owner and operator of Maui Skydiving. “Skydiving was a tough market to break into on Maui, but despite the market there was definitely opportunity.”

St Louis, preferring Matty to Mathieu, has been operating Maui Skydiving since moving to the island in 2018. Having grown up around aviation – both his parents were pilots and skydivers – he developed the passion while young. But his path to owning his own business wasn’t easy flying.

Born in Quebec, St Louis spent most of his youth drifting between Las Vegas and Montreal with his family, following the warmth with the seasons. When his family relocated to Vancouver, he struck out on his own as a young adult with his first business. Early success soon fell to ruin and St Louis found himself on the streets, working odd jobs before an assistance program called Zero Ceiling helped get him back on his feet. The program took young houseless adults and put them up in Whistler as snowboarding instructors, providing housing and amenities in the process. 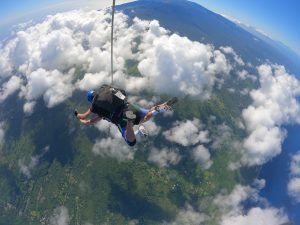 “This program really helped me get back on the right path, both mentally and financially,” he said. “Living and working on the streets really does something to you, and it’s a hard mentality to break from.”

But break from it he did, and in his mid twenties his passion for aviation soared back into his life. By the time he was 26, St Louis was a skydiving instructor, moving up the ranks while getting new licenses and certifications around the world, including Canada, Australia, New Zealand, Mexico, and California. At 32 years old, he was operating his own business, three years ahead of his personal ten year plan. But the drifting life was getting to him.

“They say a rolling stone doesn’t gather any moss, but after some time you kind of wish you were gathering moss,” he said. While operating in Mexico, he met his wife, Ylenia, who has a background in marine biology and scuba instructing.

They saw potential for both of their fields in Hawaii, and made the move to Kauai in 2015. Shortly after they relocated to Oahu, and finally settled on Maui in 2018 – an island that had seen skydiving business before, but none of which succeeded. 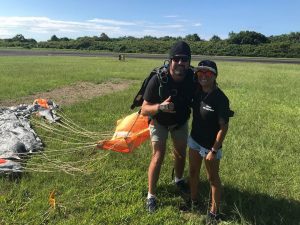 “Three people before me had come and failed to establish skydiving operations on Maui. So I talked to them, figured out their pitfalls,” said St Louis. “Their failures were not going to be mine.”

Of course, he had his struggles. Maui’s airport situation wasn’t the best for skydiving: Kahului is too busy, Kapalua is private, and Hana is remote, but they settled on Hana and found a way to make it work after struggling for a few years.

“Now things are rainbows and sunshine,” he said.

These rainbows and sunshine can be clouded with carbon, and St Louis is very aware of the problems with the aviation industry. His passion for flying and skydiving, and his desire to help the planet and his island home, drove him to start regular donations to Maui Nui Marine Resource Council.

“Aviation is a dirty industry, and I wanted to do something. I didn’t want my passion to intercept my support for conservation,” he said.

St Louis researched global standards for carbon offsets, and was astounded by how little money is actually recommended to offset one metric ton of carbon – sometimes as little as nine cents per gallon of fuel burned. He knew he had to do more than this, and decided he would give more than this, and give to a local organization working to protect Maui. Since October 2021, St Louis has made monthly donations based on the amount of fuel his planes use, as a unique way to pursue carbon offsets.

“I love Maui Nui Marine Resource Council, and the organization is exactly what I’m looking for in a relationship with a nonprofit,” he said. “You work for healthy reefs, clean water, and abundant fish, and we want that too. I only wish we could support you more.”