KIHEI – The 939-acre Olowalu reef has been identified as one of the most essential reefs to protect on the island of Maui. Olowalu was declared an official Mission Blue Hope Spot in 2017, and research has shown that this large reef is an important source of larvae for other reefs in Maui Nui. However, issues from both the land and sea threaten this vital reef system. But efforts are underway to restore the area, with The Nature Conservancy (TNC) and other local organizations heavily involved.

The public is invited to learn more about this ecosystem and the efforts to protect it in a free webinar, “The Vision for Olowalu-Ukumehame-Papalaua,” on Wednesday November 2 at 5:30 pm, led by environmental engineer Kim Falinski of TNC. This presentation is part of Maui Nui Marine Resource Council’s (MNMRC) monthly Know Your Ocean Speaker Series, sponsored by the County of Maui. Admission is free but advanced registration is required. Register here.

TNC’s goal is to plan and implement restoration actions that will make a difference at scale in the watersheds along the Olowalu reef, informed by the best available science, with a coalition of partners who collectively support and prioritize this work. The desired long-term outcome is an engaged coalition of landowners, government partners, and local stakeholders invested in and committed to funding and implementing actions to protect and restore the Olowalu reef.

“The threats to the reef are many, but poor water quality is identified as an important stressor, with sediment as the major contributor,” said Falinski. “Directly above the Olowalu reef is a low-lying coastal area that includes degraded wetlands and sand dunes. Further upland, wildland fires and pressure from axis deer kill the grasses and shrubs that hold our soil.”

Falinski’s work in the area has identified major source points of sediment and soil erosion hotspots along the four-mile stretch of road that runs parallel to the reef system. TNC’s efforts in the area will help inform government actions to protect the reef. State and Maui County landowners have plans for the next 20 years to improve the coastal and coastal-adjacent resources. The State Department of Transportation plans to move the coastal highway inland. The State Division of Forestry and Wildlife is proposing to build fencing to revegetate this area.

“Not only is Olowalu a seed reef for other coral reefs around Maui Nui, it’s also home to the oldest coral in the main islands of Hawai’i,” said Amy Hodges, Programs and Operations Manager at Maui Nui Marine Resource Council. “Protecting this reef is vital, and we’re excited to hear what TNC and other stakeholders are doing to preserve this unique reef.”

Register for the webinar here. 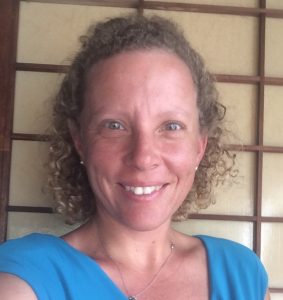 Kim Falinski is an environmental engineer advising ridge to reef conservation projects in Hawaii and Palmyra Atoll for The Nature Conservancy. She focuses on green infrastructure solutions to mitigating sediment, nutrients, and pollutants from watersheds that affect coastal water quality. Recent projects include monitoring the effects of native Hawaiian restoration for a 200-acre wetland in windward O’ahu, partnering with the USGS on erosion control management recommendations on Hawai’i island, and developing quality assurance documents for a large-scale citizen science water quality project in collaboration with the Department of Health. Falinski earned her BS at MIT in electrical science and engineering, and PhD in tropical plant and soil sciences from the University of Hawaii. She has lived in Nepal teaching environmental science and English, and the Bahamas as a researcher and instructor at The Island School, part of the Cape Eleuthera Institute.

In her spare time, she runs Nalo Meli Honey and keeps urban bee hives in Honolulu.